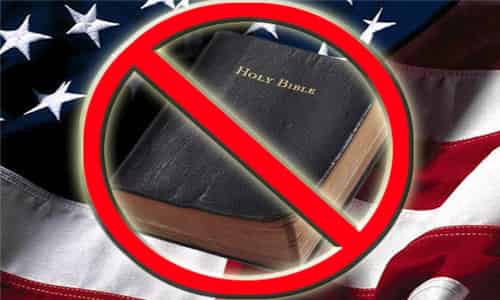 By Joshua Arnold/Washington Stand January 24, 2023
Share this article:
Nine federal agencies have announced a proposed rule change that would roll back Trump-era protections for faith-based organizations against discrimination by the federal government. The agencies cloak their discrimination in seemingly neutral language, through changes that "really get into the weeds," as Travis Weber, FRC vice president for Policy and Government Affairs, said on "Washington Watch."
Weber explained the rules "shape the way organizations can freely participate in our cultural marketplace" and roll "back the way in which organizations can participate with the federal government and remain free to their faith."
The proposed rule attracted criticism from Senator Marco Rubio (R-Fla.), who warned, "President Biden's new rules will empower agencies to discriminate against faith-based charities, likely hurting some of the most vulnerable people in our communities."
Weber explained that the rules surrounding faith-based partnerships go back two decades to the George W. Bush administration. "The Bush administration laid out a protocol on this, followed by the Obama administration, followed by the Trump administration," he said. To comply with a 2018 executive order from President Trump, the nine relevant agencies adopted a rule in 2020 which "laid out a robust system for ensuring that religious entities can partner with the federal government while remaining free to live out their faith and, in a robust manner, ensure their organizational integrity," said Weber.

But, in early 2021, President Biden revoked Trump's executive order in an order of his own, which tasked the agencies with "rolling back large segments of the Trump rule," said Weber. The proposed rule aims to comply with Biden's 2021 executive order.
The nine federal agencies involved with the proposed rule are: Department of Education, Department of Homeland Security, Department of Agriculture, Agency for International Development, Department of Housing and Urban Development, Department of Justice, Department of Labor, Department of Veterans Affairs, and Department of Health and Human Services.
The proposed rule would cover almost all social programs -- Weber called it "comprehensive" -- "wherein, federal funds are not distributed directly to individuals but, rather, are distributed to recipients -- for example, State and local governments, school districts, nonprofit organizations, institutions of higher education, and other entities -- that use the Federal funds to provide services to the programs' intended beneficiaries."
Providers must "comply both with applicable Federal law and with the terms and conditions under which they receive Federal funding," for example, that "they will comply with all relevant Federal civil rights and nondiscrimination laws."
Weber identified "two flashpoints" in the proposed rule. "One involves the clash ... between the ideology of the sexual revolution -- and that includes sexual orientation nondiscrimination, gender identity nondiscrimination -- the clash between that ideology and religious freedom." The second conflict involves "the state declaring the marketplace, the public square ... to be a secular zone," he continued. "The Biden administration is putting its thumb ... on the side of this secularization of the federal government by rolling back areas where religious entities might engage in more robust practice."
Of course, a regulatory change in a proposed rule "doesn't sound very glamorous," so "it may not get a lot of attention initially," said Weber. "Changes to the way an organization has to refer or not refer its clients," or whether it can "require recipients to go through all of its programming ... doesn't have a lot of zing." But burying its religious discrimination under mounds of boring, uninspired language is exactly what bureaucrats excel at -- and exactly what the Biden administration aims to do.

For instance, the "agencies" propose to require service providers "to provide notice to beneficiaries or prospective beneficiaries about how to obtain information about other available federally funded service providers." The Proposed Rule estimates this notification requirement would cost an annual $80 million.
The requirement effectively reinstates a requirement adopted by the Obama administration in 2010 that faith-based organizations must provide "referrals to alternative providers when beneficiaries objected to the religious character of the organizations providing services." Such a requirement would, for example, force a faith-based, pro-life healthcare provider to refer clients seeking abortion to their nearest Planned Parenthood.
The agencies also propose to "remove language added by the 2020 Rule stating that providers at which beneficiaries choose to expend indirect aid 'may require attendance at all activities that are fundamental to the program.'" This change is explicitly to clarify that individuals participating in faith-based social services may choose not to attend any religious services. In reality, the change will operate in the opposite manner, forcing organizations who have deeply integrated their faith into their programs to withdraw themselves from participation in federal funding.
One can imagine prison ministries, drug rehabilitation programs that include Bible study, or soup kitchens that provide a free sermon with dinner, refusing to fundamentally redesign their faith-based ministry to obtain government funding.
Again, the agencies propose "decoupling its religious nondiscrimination protections from the question of [religious] accommodations." This change is intended to clarify that the agencies won't promise to grant a religious accommodation unless it's "required by Federal law." Thus, the power to grant or deny a wide range of permissible religious accommodations will remain in the stingy talons of the Biden administration. To predict how they will employ their discretion, look no further than their mistreatment of religious accommodation requests from military personnel objecting to the COVID vaccine. They hardly care to disguise the seething disdain they harbor for any religious practice departing from their progressive orthodoxy.
To aggravate this affront, neighboring language in the proposed rule provides that "Agencies will not, in their selection of service providers, discriminate ... on the basis of conduct that would not be considered grounds to disfavor a similarly situated secular organization." This seemingly neutral "non-discrimination" clause is actually a license for religious discrimination.
It requires faith-based organizations to conduct themselves in the same way as a secular organization, lest they give "grounds to disfavor a similarly situated secular organization" -- a phrase that appears 18 times in the proposed rule.
The most obvious example of such "grounds" is a code of conduct consistent with biblical teaching about sex, gender, and marriage. If a faith-based organization forbids its employees (or beneficiaries) from extramarital sex, same-sex marriage, or altering their gender -- even on legitimate, religious grounds -- the agencies can use this definition as an excuse to toss their application for federal funding.

This would also harm faith-based adoption providers who will only place children with married, man-woman couples, women's shelters who refuse to admit gender-confused biological males, or a religious hospital that refuses to perform gender transition procedures.
In case their intention to discriminate was not yet clear, the agencies included an entire section on their interpretation of Title VII, the section of federal law prohibiting employment discrimination, according to the Supreme Court's Bostock decision. "The Title VII religious exemption does not permit such organizations to discriminate against workers on the basis of another protected classification ... such as those that might amount to discrimination on the basis of employees' sex."
They then proceeded to quote from Bostock, a 2020 decision which redefined "sex" to include sexual orientation and gender identity for the purposes of employment law. The agencies make explicit that faith-based providers may not claim a religious exemption against hiring employees who identify as homosexual or transgender.
A final example of the proposed rule's rollback from partnership with faith-based organizations is a redefinition of "indirect Federal financial assistance" (anything, such as vouchers, where the government does not decide where the money is spent) to state that "the availability of adequate secular alternatives is a significant factor in determining whether a program affords true private choice." The agencies clarified that the Supreme Court won't allow them to outright deny applications simply because there are no non-religious options for social support in a geographical area, but they are willing to put in work to find non-religious alternatives.
Just consider that sentiment for a moment. Say that, in a medium-sized city in Oklahoma or Ohio, only faith-based charities provide a particular service -- food and shelter for homeless veterans, for instance -- so that a homeless person must decide whether he wants to eat and sleep in the Baptist shelter, the Catholic shelter, the Methodist shelter, or the Lutheran shelter. These federal agencies look at that situation and think, "We have a problem here; why isn't there a secular shelter?"
Not only that, but they define the problem as a lack of "true private choice," even though there may be plenty of choices. While judicially prohibited from shutting off these charities from the possibility of federal aid, the agencies still believe a situation like this is serious enough that it's worthwhile for them to employ limited resources identifying or establishing a secular competitor to these faith-based charities.
What makes this whole proposed rule so ridiculous is that, by excluding many religious partners, the government will simply create more work for itself. After all, the Americans most likely to found or participate in local charities that can distribute social services are motivated to do so by their faith. Long before government got into the business of supplying social services, it was Christians who built orphanages and distributed food and provided other indispensable aid to the poor and vulnerable.
Yet somehow, the government believes it can best promote social services by boxing out the very groups most eager to help -- all because it chafes at their constitutionally-protected religious views and practices.
Many faith-based charities will respond to government pressure by withdrawing, said Weber. He suggested they would respond upon these lines, "We want to help serve our communities, partner with the federal government, distribute federal money, but we don't want to be forced to violate our faith in the process." Rubio agreed.
"Instead of targeting and punishing people living out their faith through service to others, we should be making it easier for churches and other faith-based organizations to help lift up Americans in need."
Originally published at The Washington Stand - reposted with permission.