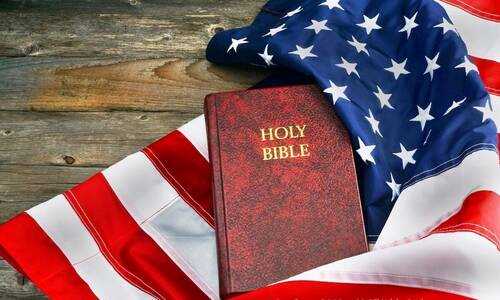 By Ben Johnson/The Washington Stand November 18, 2022
Share this article:
A bill supported by President Biden that would legalize same-sex marriage nationwide, threaten Christians who object to participating in LGBT ceremonies, and create a bonanza for trial lawyers to sue believers in natural marriage cleared a key Senate hurdle Wednesday afternoon -- with the assistance of 12 Republicans.
H.R. 8404, labeled the "Respect for Marriage" Act by supporters and the "Disrespect for Marriage" act by critics, needed at least 60 votes to overcome a potential filibuster. It passed a cloture vote, 62-37. The bill would force all 50 states to recognize any marriage legally allowed in any other state and formally repeal the 1996 Defense of Marriage Act (DOMA).
It would also create a private right of action, allowing anyone who feels discriminated against to sue any individual or business who refuses to participate in such a ceremony, even if motivated by faith-based objections.
"The U.S. Senate is making a mockery of marriage as it tramples on a foundational right -- religious freedom of the individual," said Family Research Council President Tony Perkins shortly after the vote.
The bill enshrines "the government picking winners and losers on the basis of who adheres to a particular, favored religious orthodoxy -- and punishing those that don't adhere to that," Senator Mike Lee (R-Utah) told "Washington Watch with Tony Perkins" on Wednesday. Its provisions are "likely to culminate in the removal of tax-exempt status from religious institutions" that uphold traditional sexual morality.

Later in the show, Senator Josh Hawley (R-Mo.) exhorted his fellow Republicans to vote the measure down. "If you care about our constitutional structure, which says that religious liberty is a foundational liberty -- it's our first liberty in the Bill of Rights -- then you should be opposing this bill," Hawley told Perkins.
The "dirty dozen" Republican senators who backed the bill include Mitt Romney (Utah), who centered his 2008 Republican presidential bid around his opposition to same-sex marriage; as well as midwestern Senators Roy Blunt (Mo.) and Joni Ernst (Iowa), who served as co-chairs of the congressional Values Action Team, which is "dedicated to advancing pro-life and pro-family policies in Congress." (See the full list below.)
To mollify objections, senators added a putative "religious liberty" amendment to the bill, stating that religious nonprofits cannot be forced to offer "any services, facilities, or goods for the solemnization or celebration of a marriage." But the amendment deals only with the ceremony itself, without protecting the right of religious charities to uphold their faith on any other policy involving marriage. Critics say this will impact faith-based orphanages and other social service organizations.
The bill also offers no protections for individual believers, such as florist Barronelle Stutzman and Masterpiece Cakeshop owner Jack Phillips, whose faith does not allow them to participate in same-sex ceremonies. "As our society becomes more secular, people are accepting the idea that our religious liberties extend no further than the four corners of the church or the synagogue, and that simply isn't true," Lee told Perkins.

"When the will of a secular society becomes hostile to religious pluralism, to the acceptance of religious minority beliefs, everyone suffers as a result." Traditional churches teach that Christians participate in other people's sins by condoning actions condemned by the Bible.
The bill would let anyone who felt discriminated against sue the believer, possibly out of business, as occurred to Stutzman -- forcing religious adherents to choose between obeying the immemorial teachings of their religion or maintaining their livelihood. The bill containing that bargain "will make our country a better, fairer place to live," contended Senate Majority Leader Chuck Schumer (D-N.Y.), whose daughter is in a same-sex marriage, on Wednesday.
But Senator Lee dismissed the so-called religious liberty amendment as "smoke and mirrors," and "a shell-game that ends ... ultimately in the destruction of religious liberty."
The bill inspired a rare bout of cross-chamber lobbying, as House conservatives asked their Senate counterparts to preserve marriage and religious liberty. "Passing this bill would codify, in federal law, a false belief on marriage and villainize millions of Americans for their religious beliefs," wrote Rep. Chip Roy (R-Texas) in a letter to Senate Republicans shortly before the vote.
He added that the amended bill still fails to address what he calls "the polygamy loophole."
In voting for the act, Republicans gave Democrats a political victory to a major voting bloc: the LGBTQ+ lobby. Progressives introduced the bill -- along with legislation favoring abortion-on-demand and abortion-inducing drugs marketed as contraceptives -- as a political cudgel shortly after Justice Clarence Thomas wrote in his lone concurrence that the Supreme Court should revisit cases involving a controversial legal theory favored by judicial activists.
Legal scholars consider the likelihood of justices overturning Obergefell v. Hodges or Griswold v. Connecticut exceedingly remote. Still, Democrats hoped to put Republicans on record as opposing abortion, redefining marriage, and contraception.

But shortly after H.R. 8404 passed the House in July with 47 Republican votes, a coalition of GOP senators approached Democrats behind the scenes to signal their support. At the request of Senator Tammy Baldwin (D-Wis.), Schumer postponed the vote until after the 2022 midterm elections, to remove electoral pressure from her GOP colleagues.
The amended bill faces additional Senate votes, where Lee said it must again obtain 60 votes, before the amended bill must again clear the House of Representatives. While it is rare for a legislator­­­ who votes for cloture to reverse his or her vote on final passage, it is possible -- especially if constituents make their objections clear.
"There's still a possibility of it being stopped," said Lee.
While Americans tell pollsters they support same-sex marriage, voters in the swing state of Ohio overwhelmingly rejected Jim Obergefell, the plaintiff in the 2015 Supreme Court case that invented the constitutional "right" to same-sex marriage, in his race for the state House of Representatives by 23 percentage points last week.
Conservative congressmen say the biblical definition of marriage, which provided the impetus for the creation of the Republican Party, will endure, regardless of legal action -- but lawmakers should be on the right side of history.
"The law cannot be neutral on marriage. It can either affirm truth or portray distortions. The foundational truth will always remain, and no act of Congress can change that," Roy wrote to the Senate. "Those who see and know the truth have a moral duty to stand firm in its defense and to defend the crucial institution of marriage."
The 12 Republican Senators who voted for the "Respect for Marriage" act are:
Roy Blunt (Mo.);
Richard Burr (N.C.);
Shelley Moore Capito (W. Va.);
Susan Collins (Maine);
Joni Ernst (Iowa);
Cynthia Lummis (Wyo.);
Lisa Murkowski (Alaska) ;
Rob Portman (Ohio);
Mitt Romney (Utah);
Dan Sullivan (Alaska);
Thom Tillis (N.C.); and
Todd Young (Ind.)
Originally published at The Washington Stand - reposted with permission.