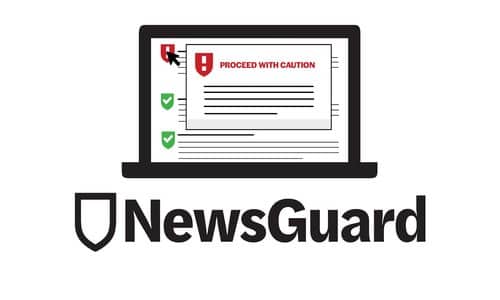 By Aaron Kesel/Activist Post February 06, 2019
Share this article:
The service NewsGuard, an establishment attempt to silence alternative media and independent media sites, has teamed up with Microsoft to help its effort to destroy free press.
NewsGuard is now automatically included in Microsoft's Edge browser on iOS, Android and Microsoft phones. Microsoft's press release regarding the partnership states that NewsGuard "will empower voters by providing them with high-quality information about the integrity and transparency of online news sites."
Just one problem, who is providing transparency about the news rating agency?

When a user decides to search the Web, the extension tells the user whether or not a story is credible or not credible with 5 indicators and an information box judging the website.
- Green icon -- Sites that follow "basic standards of accuracy and accountability" based on nine criteria,which include full disclosure of possible conflicts of interest, financing, and "notable ideological or political positions held by those with significant financial interests in the site."
- Red icon -- Sites that do not fulfill NewsGuard's criteria for credibility and transparency.
- Orange icon -- Satire and humor sites that mimic real news.
- Blue icon -- Sites that primarily host user-generated content.
- Gray icon --Unrated sites.
There is just one problem: the plugin is only blacklisting certain sites and does not actually have fact checkers looking into the story in question. So, in fact, the service is censoring alternative and independent media. But, let's be honest, that's exactly what its founders, creators, funders, and advisors want.
About that transparency ... the list of advisors for NewsGuard includes Tom Ridge, the former secretary of Homeland Security, Richard Stengel, former editor of Time magazine and Undersecretary of State for Public Diplomacy (Obama administration), (Ret.) General Michael Hayden, former Director of the CIA, former Director of the National Security Agency and former Principal Deputy Director of National Intelligence (George W. Bush administration), Don Baer, chairman of Burson, Cohn & Wolfe and former White House Communications Director (Clinton administration).
If you aren't concerned about a company promoting censorship with a former CIA director and a former secretary of Homeland Security official as its advisors, you may need a reality check.
Then there is Richard Stengel, a member of the Atlantic Council and former Undersecretary of State for Public Diplomacy under President Barack Obama who deserves a short blurb for his own involvement. Why? Because Stengel admitted his role in life at a previous discussion hosted last May by the Council on Foreign Relations (CFR). At the event Stengel described his past position at the State Department as a "chief propagandist" and further stated that he is "not against propaganda" and it was needed.
"Every country does it and they have to do it to their own population and I don't necessarily think it's that awful," Stengel said.

According to NewsGuard, the service has rated more than 2,000 news and information sites, while it plans to take its ranking efforts much further by eventually reviewing "the 7,500 most-read news and information websites in the U.S.; also noting that the number accounts for "about 98 percent news and information people read and share online" in the United States in English.
The company is lobbying to have its rankings of news sites installed by default on computers in U.S. public libraries, schools, and universities as well as on smartphones and computers sold in the United States. And its partnership with Microsoft for its Edge browser just helped that effort rigorously.
Several articles represent NewsGuard as using "old-school journalism" to fight "fake news" through its reliance on nine criteria to determine whether a news site is credible or not.
However, as Breitbart pointed out (like them or not the information is credible), the news check extension is marking verifiable FAKE news stories as real news, a worrying prospect. Of course, it's worth noting that NewsGuard is probably in partnership with select news publications like The New York Times, LA Times, CNN, Washington Post, etc.
Look at how NewsGuard and Microsoft openly and audaciously deceive their readers...
The Washington Post's debunked hoax about Russia hacking Vermont's utility grid -- credible!!
The lie about first lady Melania Trump being an illegal alien -- credible!!
The lie about Trump changing the name of Black History Month -- credible!!
The lie about Trump threatening to invade Mexico -- credible!!
The lie about Congress investigating a Russian fund with ties to Trump -- credible!!
These are obvious red flags for anyone looking for a truly unbiased fact-checking service when such things are hidden and not publicly displayed ... that, or they just suck at researching, which would essentially mean they aren't qualified to determine what is real and fake news.
Digging even deeper into NewsGuard we may find answers as to why they are not fact checking every news story and just giving websites themselves a rating, because the company only has 21-30 employees according to Pitchbook.

It will be interesting to see where this goes if this plugin is adopted by the mainstream as a default into applications. I foresee class action cease and desist lawsuits against "NewsGuard" for intentionally causing harm to businesses with just a checkmark.
This is already pretty well proven with a recent Gallup study that stated 63 percent of news readers were less likely to share a website with a red rating, while a green rating increased the likelihood of sharing by 56 percent. Although the study was funded by NewsGuard themselves, so the results should be taken with a grain of salt.
Further research into NewsGuard and its other products shows they have a BrandGuard, which they market to advertisers as a "brand safety tool aimed at helping advertisers keep their brands off of unreliable news and information sites while giving them the assurance they need to support thousands of Green-rated [NewsGuard-approved] news and information sites, big and small."
All of this has an interesting timing, right before the 2020 primaries. Who's to say that this technology couldn't be used to sway the election far more than any foreign player ever could? Especially since the firm is seeking to have its tech implanted by default into every major technical device.
We don't need arbiters of truth; what we need are smarter readers who research and dig deeper themselves, instead of blindly believing what they are told or hand fed.
With all that stated, it's worth mentioning that 90% of U.S. media was owned by 6 different companies in 2012 including GE, NewsCorp, Disney, Viacom, TimeWarner, CBS. Essentially, the CFR owns the media.
So with all that in mind, one finds it hard to believe that a CFR member and government cronies -- some even connected to think tanks -- want to "restore trust and accountability" in journalism.
This is far from the only effort to try and suppress the free flow of information online. In 2017 Activist Post reported that Full Fact foundation, backed by eBay founder Pierre Omidyar and our favorite billionaire tycoon George Soros, were also planning to fight the efforts of "fake news" with their AI-powered detector. Wikipedia founder Jimmy Wales was also planning to launch a crowd-funded news service called WikiTribune to help combat fake news.
Send your mail to NewsGuard's Twitter feed and Facebook page, and flood them with your opinion about their efforts. If they ask who sent you, say George Orwell from his grave and make sure to tell them they aren't the Ministry Of Truth, this isn't 1984.
Putting the future of what we believe in anyone's hands, let alone artificial intelligence, seems reckless; but a system backed by Soros and Omidyar or think tanks and government officials seems like a dangerous idea that can only lead to a path paved toward a road of Orwellian censorship the likes of which even George Orwell couldn't have imagined.
Originally published at Activist Post - reposted with permission.