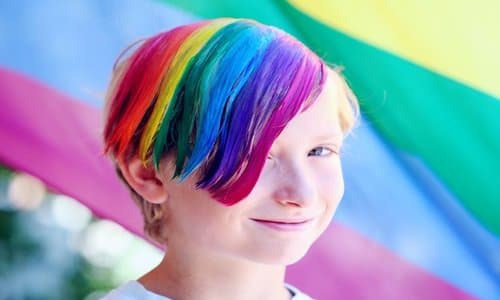 By PNW Staff January 22, 2019
Share this article:
The rush to embrace transgenderism in children has adopted a dangerous new medical practice: hormone blockers that prevent puberty. These powerful drugs, most of them intended to be used for cancer treatments in adults, have profound and likely irreversible effects on the bodies of children and teens suffering from gender dysphoria.
Aside from the psychological damage now becoming apparent, hormone blockers administered before and during puberty cause dramatically lower bone density, cripplingly painful autoimmune disorders and sterility.

Yet all of this has been pushed aside to satisfy a radical transgender agenda above all else. Now we see doctor's prescribing drugs outside their intended purpose, courts revoking parental rights in order to impose hormone unregulated hormone blockers and medical associations being co-opted by trans-radicals who promote such treatments despite all the evidence of their harm.
One of the most common hormone blockers used to prevent puberty is Lupron. Lupron, a specific gonadotrophin hormone-releasing agonist drug, suppresses estrogen production in girls and is used for girls who believe themselves to be boys.
When administered before or during puberty, Lupron works to delay or stall the physical changes that would otherwise occur in a healthy female body, the logic being that the gender-dysphoric (confused) patient has time to decide her sexual identity.
The problem is that what is being touted as a temporary treatment, sending a young girl's hormones out of balance, is anything but, and the repercussions of such wantonly applied hormones can be both devastating and irreversible.
Even leaving aside the clear medical dangers of such treatments, the argument that administering puberty-blocking drugs that throw the endocrine system far out of balance can deal with a psychological disorder is itself wrong. Studies have shown that gender dysphoria is resolved without the use of drugs through traditional psychotherapy andsimply waiting in 80-95% of cases.

In contrast, 100% of patients who have been treated with hormone blockers have gone on later to receive an invasive series of opposite gender hormone treatments and/or gender reassignment surgery.
Rather than providing preteens with the "time to think it through", the evidence has shown(thus far, without exception) that such drugs propel them down a lifetime path of dependence on drugs and surgery. Without hormone blockers, only 5-15% of patients suffering from gender dysphoria eventually request further treatment. With it, all do.
Endocrinologist Dr. Michael Laidlaw has warned not only of the psychological dangers of abusing hormone blockers to prevent puberty, but the irreversible effects on the pituitary gland. Puberty is a crucial time for increasing bone density and Laidlaw, along with other experts, believe that patients may never develop healthy adult bone density after disrupting puberty.
He writes, "It has been shown that puberty blockers interfere with the expected increase in bone density in adolescence such that the bones are not as strong as they would be had normal pubertal development been allowed. This is due to the effect of dropping sex hormone levels to subnormal levels. These lost years of bone development cannot be regained."
In California, state law AB 2119, which would mandate government funds for hormone blockers and gender reassignment treatments for children in foster care, came up for debate and experts such as Dr. Laidlaw and Dr. Andre Van Mol testified before the legislature as to their harmful effects. In his testimony, Dr. Laidlaw stated, "Children are being sterilized.
Their sexual function is being permanently destroyed. They are being exposed to lifelong health risks for this 'affirmative' therapy, without being given the needed psychological therapy. AB2119 is a mistake. Please strike it down." AB 2119 was passed in September of 2018 and such treatments must now be funded with state funds.
In California, those most affected will be those in state foster care, but traditional parents are also under threat from the State imposition of hormone therapy, such as in the case of a 17-year-old girl in Ohio who has been removed from the custody of her Christian parents because they opposed the use of hormone therapy on their teenage daughter.

The girl, who is now transitioning to be a man, was given over to the custody of her grandparents and has been administered hormones against the will of her parents who counseled a more careful approach to her gender dysphoria.
Andrew Walker, Director of Policy Studies for the Ethics & Religious Liberty Commission of the Southern Baptist Convention, Tweeted, "This case ought to send a chill down the spine of every parent in observing what the state can do to tamper with parental rights in order to further the Sexual Revolution" and it would be hard to see how he is wrong.
In the UK, schools now react within minutes to a child's claim that he or she is questioning his or her gender identity and the actions taken can go against the wishes of parents.
The use of powerful anti-cancer drugs to stall puberty needs to be seen for what it is: a horrible form of child abuse that is leaving its victims disabled, sterile and dependent on decades of invasive medical procedures.
Even with regard to its ostensible purpose of allowing time to evaluate their choices, the use of hormone blockers fails,and the side effects are far worse, even resulting in increased rates of suicide for those affected.