European Court Rules People Can Be Fined For Speaking Against Mohammad 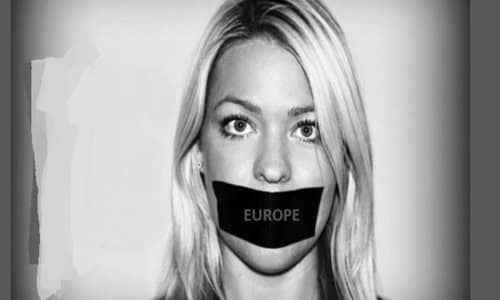 By Ryan McMaken/Activist Post October 29, 2018
Share this article:
A European court has ruled that saying bad things about the Muslim prophet Mohammad is verboten, and state punishment is appropriate.
The European Court of Human Rights has ruled a woman convicted by an Austrian court of calling the Prophet Mohammed a paedophile did not have her freedom of speech rights infringed.
The woman, named only as Mrs. S, 47, from Vienna, was said to have held two seminars in which she discussed the marriage between the Prophet Mohammad and a six-year old girl, Aisha....Mrs S. was later convicted in February 2011 by the Vienna Regional Criminal Court for disparaging religious doctrines and ordered her to pay a fine of 480 euros plus legal fees.

The court's primary reasoning, it appears, is that the woman's comments ought to condemned because they might "stir up prejudice and threaten religious peace..." Notably, however, Mrs. S is not accused of saying anything that encourages violence either generally or in any specific way.
In other words, human rights go right out the window if the exercise of those rights might cause other people to feel bad.
This sort of thing is shocking to Americans, of course, but it's old hat by now in Europe (and Canada) where one can face large fines , and even imprisonment for saying unpopular things.
Just some examples include:
A candidate in the European elections was arrested in Britain for quoting a passage from Winston Churchill about Islam.
Gert Wilders, a politician in the Netherlands, was tried on five counts including "criminally insulting Muslims because of their religion."
Both Mark Steyn and Ezra Levant were dragged in front of the Canadian Human Rights Commission on charges of being "Islamophobic."
Moreover, it reflects a larger disdain for private property that is so widespread in Europe. Consider, that the comments made by the woman in question were apparently made at "two seminars." Presumably, no one who didn't wish to listen to the ideas of Mrs. S was forced to do so. And there is no claim that Mrs. S trespassed on anyone's property to express these ideas.

As noted by Murray Rothbard, the right to free speech is not a special right, but is intimately connected to property rights. If Mrs. S was expressing her ideas in a place and in a way that did not violate anyone else's property rights, then she was acting peacefully and in a way that respects the rights of others.
In other words, it appears that there was no coercion or violence of any sort involved in Mrs. S's expression of her ideas.
The Court, however, has decided that the proper response to her peaceful activities is to use violence -- by imposing fines.
Moreover, the court appears to be unconcerned as to whether the facts relayed by Mrs. S, relating to Mohammad's marriage to a young girl, are accurate or not. This would appear to be important to most reasonable people, but presuming that Mrs. S comments about Muhammad's child bride are accurate -- which they appear to be -- the court is basically taking the position that stating well-known historical facts constitutes some sort of hate speech.

The larger goal, it appears is to pander to certain interest groups at the expense of basic freedoms. One is left wondering, however, if the Court would react with equal enthusiasm to equally disparaging remarks about Christianity or Christians.
State-directed punishments of this sort, of course, ought not be confused with non-governmental efforts at silencing critics. While Americans certainly are fond of launching campaigns to get people fired or ostracized when they say unpopular things, these actions are nonetheless qualitatively different from being hauled into civil or criminal court by government officials, and then threatening the accused with thousands of dollars in fines, or even a jail term.
Originally published at Activist Post - reposted with permission.