Mega Church Pastor Suggests We Should Unhitch From The Ten Commandments 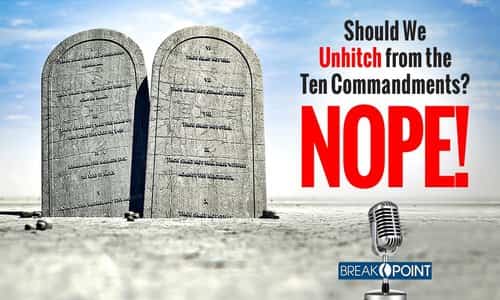 By John Stonestreet/Breakpoint.org September 27, 2018
Share this article:
Is all the Bible relevant to a Christian worldview? One well-known pastor recently suggested it isn't. But I beg to differ.
What's the only passage in Scripture personally written down by God? If you answered "the Ten Commandments," you're right on the money. Exodus tells us that God audibly spoke these laws at Mount Sinai and inscribed them on tablets of stone with His own finger.

Of course, that's not the only reason the Ten Commandments have a central place in the Judeo-Christian tradition. Christians have long understood them to be the clearest expression of God's eternal moral character.
Not to mention, they played an instrumental role in shaping Western civilization, including forming the foundation of our legal system and our understanding of justice. It's why Moses and those tablets can be found at the apex of the U.S. Supreme Court.
Recently in Relevant Magazine, Georgia pastor Andy Stanley argued that we shouldn't build monuments to the Ten Commandments in churches or courthouses because these rules are "from the old covenant."
The article was a follow-up, in a sense, to something that Pastor Stanley said back in May when he advised his congregation to "unhitch" their faith from the Old Testament. In this latest article, Stanley writes that "Jesus' death and resurrection signaled the end" of God's old covenant with Israel and its regulations, "including the big ten."

Now, Stanley argues, Jesus' "new commandment" to "love one another," which is found in John 13:34, should replace the Ten Commandments. If Christians obey the new commandment, he says, we "are not required to obey any of the commandments found in the first part of our Bibles."
I think Stanley is wrong on this, very wrong in fact. But to be clear, it's not personal. I'm not trying to single him out. I've heard many evangelicals suggest, in one way or another at various levels of theological sophistication, that the Old Testament just isn't relevant to us any longer because all of that was done away with by Christ.
This is a tragic misreading of the Scriptures.
In the Sermon on the Mount, Jesus told his listeners, "Do not think that I have come to abolish the Law and the Prophets...but to fulfill them." And in Matthew 22, He says the commands to "love the Lord your God" and "love your neighbor as yourself"--quoting from Leviticus and Deuteronomy--summarize, not replace, the law and prophets.
In other words, Christ's command that we love one another isn't an alternative to the Ten Commandments. It restates them in simpler terms.
The moral principles expressed in the Ten Commandments didn't come into existence at Sinai. They're part of God's eternal character which He built into the very fabric of reality itself. Even more, Jesus relied on the Old Testament throughout His ministry and in His teaching, especially when making the moral case for something.

The reason, from a Christian worldview, is clear: Whether we're talking about the moral principles expressed in the Ten Commandments which Christ perfectly kept or the ceremonial regulations of Leviticus which foreshadowed our perfect High Priest, all of the Old Testament is relevant to Christianity.
Jesus affirmed the God of the Old Testament is our God still, that the Creator of the world and the giver of the law is our loving Father who is both just and the justifier of the ungodly. And who promised to write His law a second time--not on tablets of stone, but as Hebrews says, on our hearts and minds.
So with all respect to Pastor Stanley, if we're going to "unhitch our faith" from anything at all, it should be the notion that any part of Scripture is irrelevant to us.
Originally published at Breakpoint.org - reposted with permission.