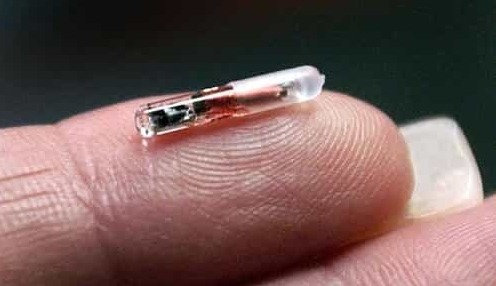 By PNW Staff August 21, 2018
Share this article:
Wisconsin based Three Square Market is now calling it's employee microchipping program a success one year after employees began the chipping process which allows them access to the workplace, signing in to their computers and even purchasing snacks after having a small microchip implanted in their hand.
Three Square Market provides self-service mini-markets to hospitals, hotels, and company break rooms. The company first launched the RFID chip option for its employees on August 1, 2017 with about 50 employees.  Over the past year, 30 more have signed on bringing the total to 80 of the 250 staff.

Sam Bengtson, a software engineer with the company, says he uses his chip 10 to 15 times a day. At this point, swiping his hand over an RFID reader plugged into his computer is no different from typing in his password on a keyboard, he says.
Steve Kassekert, vice president of finance, is so used to using his hand to pay for soda at work that he was annoyed when the RFID reader on the vending machine went down a couple of months ago.
"It's just become such a part of my routine," he says.
Patrick McMullan is the president of Three Square Marekt and said the idea for implanting employees first came from a trip to Sweden in 2017.
In Sweden, people are abandoning the use of paper money for an increasing number of everyday transactions.
In fact, the amount of hard cash in circulation has decreased by 40 percent in the last 7 years. Sweden is beginning to look at doing away with physical money in favor of a completely digital currency which may include a microchip under the skin.
Swedes have become very active in microchipping, with scant debate about issues surrounding its use, in a country keen on new technology and where the sharing of personal information is held up as a sign of a transparent society.

Commuters in Sweden are an example of trading cash for convenience as several hundred have already been chipped to be able to use the SJ Rail transit system.
The train conductor can then simply read the chip with a smartphone to confirm the passenger has paid for their journey.  Another 3,000 have been chipped so that they can have easy access to secure areas of buildings.  See the video below:
Although there are advantages to microchip technology, opponents have pointed out a wide range of risks and concerns that come along with it.
Infringement on Privacy
One of the main concerns about implanting microchips is that it infringes on personal privacy. Even if a person should volunteer for the implant, there is a good chance that they are not fully considering the level of privacy that they are giving up.
Furthermore, as in the case with the company in Wisconsin, there could be a certain level of peer or other pressure that may force someone to "volunteer" for the implant.
Tracking
Along with giving up some level of personal privacy, those that have a microchip implanted are also risking that they could be tracked.  Over the past few years, it has become more and more clear how much of our information is being tracked by the major Internet and social media companies.
With microchips, depending on the chip's design and how it is programmed, a company could track even more of your daily life, including your location, how much time you spend sleeping, and what you spend your money on.  It also remains to be seen how this accumulation of data could be used against you in the future.
There has already been proposals to use microchip implant tracking with criminals and immigration procedures and while these past proposals might have failed it is only a matter of time before they come up again.
Hacking
Another concern that many people have is that there will always be a risk of hacking into the microchips and databases.  Although microchip implants are considered to be very secure and difficult to break into, hackers always seem to be a step ahead of security measures.
If someone is able successfully to hack into your microchip account, they may be able to replicate your chip.  In these situations, it would be incredibly easy for a hacker to easily steal your identity and make major purchases in your name.
Big Brother
The fourth concern about microchip technology is that it is just the first step towards a "Big Brother" society that is depicted in the book "1984".  In the novel, all people in a fictional society are chipped and tracked on an ongoing basis, as there is an utter loss of freedom.
Even though the current use of the microchips may seem extremely limited compared to the uses depicted in the novel, it clearly could be a first step in that terrifying direction.
It is easy to see a few positive benefits to chipping.  Animals have long been chipped as a means of inventory and disease control, to say nothing of recovering lost or stolen pets. Persons with compromised mental capacity, e.g. Alzheimer's, who wander off and get lost could greatly benefit from having a chip.
An NBC News report last year asserted the microchipping of children will happen "sooner rather than later" due to parental safety concerns and that Americans will eventually accept the process as something just as normal as the barcode.
"It's not a matter of if it will happen, but when," electronics expert Stuart Lipoff told the network.
Pre-Conditioning For The "Mark" of Revelation
The Book of Revelation warns that during the Tribulation every person will be required to accept a mark which will signify worship of a one world leader and be necessary for commerce:  "And the second beast required all people small and great, rich and poor, free and slave, to receive a mark on their right hand or on their forehead, so that no one could buy or sell unless he had the mark -- the name of the beast or the number of its name. Here is a call for wisdom: Let the one who has insight calculate the number of the beast, for it is the number of a man, and that number is six hundred sixty-six". Revelation 13:16-18
Most Christians recognize that current chip implants are not the actual "mark of the beast", yet there is concern that acceptance of such technology is conditioning people for when the real one does come along.
What often starts off as voluntary can just as easily become mandatory and whereas tech itself may be neutral, in the hands of the wrong person it could be extremely dangerous.  Imagine the technology of today in the hands of Hitler.
Christians have long debated the meaning of the "mark of the beast".  Our generation, however, appears to be the first to have the technology to fulfill this prophecy.
Soon, you may have to answer the question: 'would you get chipped'?