Hebrew: A Revived Language For A Restored People 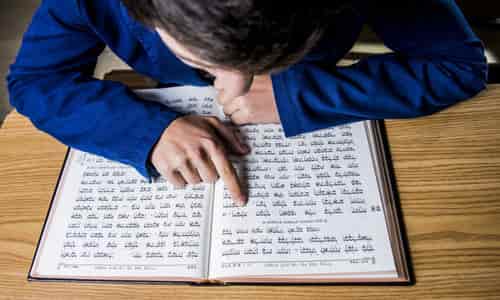 By Enoch Lavender April 04, 2016
Share this article:
"For then I will restore to the peoples a pure language, that they all may call on the name of the Lord..." Zep. 3:9 NKJV
While this verse tells us that God is going to restore 'a pure language' to the peoples, it is not immediately clear which language the Prophet is describing.

A Chinese Pastor friend of mine is convinced that this passage is talking about the Chinese language. He points out how many Chinese characters contain within them key aspects of the gospel.
For example, the word for 'large boat' is made up of characters meaning '8 people in a boat' - as found in the story of Noah's ark. Another example is the Chinese character for 'righteousness', which consists of a lamb above a person.
While these hidden meanings in the Chinese language are fascinating, I firmly believe that the language God is specifically speaking about in Zephaniah 3:9 is indeed Hebrew. As we look at the previous verse, we find the only verse in the Bible that contains the entire Hebrew alphabet.
In addition, Hebrew has five special letters which are written differently at the ends of words, and all five of these forms are contained within this one verse. In other words, right after this unique verse that lists the entire Hebrew alphabet, we find the statement that God will 'restore a pure language'.
In 1875, the prophecy of Zephaniah was awakened within the soul of a young Jewish boy named Eliezer Ben Yehudah. This young man had a vision in which he heard a voice say 'The Return of the People to the Land and the Language". Eliezer realised that without one common language there could be no nation of Israel.
Despite having been diagnosed with terminal TB, Eliezer worked tirelessly for 40 years to revive the language. His mission was a success- culminating in Hebrew being officially recognized as a language of Palestine in 1921.

The restoration of Hebrew was nothing short of miraculous, and was unprecedented in world history. But why was the language restored? What was God's purpose behind the restoration?
Zephaniah said the language of Hebrew would be restored, so that the 'people may call on the Name of the Lord'. Furthermore, Jesus proclaimed that Jerusalem would not see Him again until they welcomed him with the Messianic greeting Baruch Haba B'Shem Adonai - Blessed is He who comes in the name of the Lord.
With the Hebrew language no longer in use and the Jewish people scattered to the four corners of the globe, Jesus' return in this manner must have seemed unlikely to many generations of Christians.
But today, thanks to the dual miracle of the "Return of the People to the Land and the Language", the stage is being set for Jesus to be welcomed back with a hearty "Baruch Haba".
God has indeed restored the Hebrew language so the peoples may call on Him - and that He may return as He has promised.