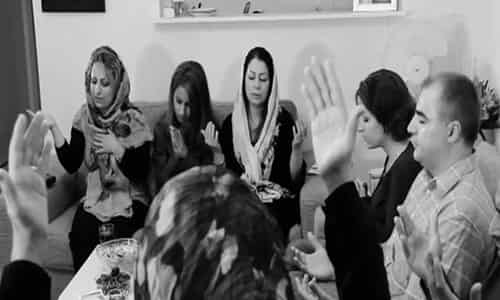 By Tom Olago March 28, 2016
Share this article:
One might be forgiven for thinking that the days of the underground church are long gone and only small scattered pockets remain. Not so: indications are that the underground church is still as alive and vibrant as ever today.

Christians are still being driven to worship in secret house churches, despite risking arrest. This is well exemplified in Iran, where Iran's secret Christian movement is said to be growing rapidly with help from abroad.
A recent account by Fox News and other news outlets confirmed these developments. The number of Muslim converts who are risking prison or death by secretly worshiping as Christians in Irans house church movement has grown to as many as 1 million people, according to watchdog groups.
The persecution of Christians has persisted in Iran since the 1979 rise of the countrys theocratic Shiite Muslim government - with Christians facing the threat of lashing, torture and death. About 100 Christians currently remain imprisoned under Iranian President Hassan Rouhani's rule. In 2010, Iranian Supreme Leader Ayatollah Ali Khamenei said the country's underground house churches "threaten the Islamic faith and deceive young Muslims."
While Iran has released high-profile Christian pastors from captivity - most notably Iranian-American Saeed Abedini - other Christian ministers still languish in the country's prisons. One example is Pastor Farshid Fathi who has been locked up in Irans notorious Evin prison since December 2010 for what the American Center for Law and Justice describes as practicing his Christian faith.
After bowing to international pressure, Iranian authorities are starting to avoid charges that appear to be based on a person's faith, according to the ACLJ. In Fathis case, his Christian activity was framed as being "criminal political offenses" by the court.
In other cases, Christian practices such as the distribution of Bibles and sharing the gospel of Jesus Christ have been re-framed with wordings such as "actions against national security," and "actions against the state" in order to facilitate prosecution.
According to Samuel Smith, a Christian Post (CP) reporter, such crackdowns on faith, however, have not prevented Iranian house churches from blossoming into a movement too big for the Iranian religious police to contain. In addition, groups like the London-based Pars Theological Center are stepping in to help expand the Christian movement from within the Islamic Republic.
CPs Smith quoted a source affiliated with the center who stated there is a strong need for leaders-in-Christ who can lead individual house churches and help the movement grow to become not just a Christian movement, but also an inherently "Iranian" one.
Part of the mandate of the students would be to become the next generation of leaders to help the house church movement grow so that it can foster a better society for all in Iran, according to the CP source.
Christianitydaily.com filed a similar report stating that the center is fostering about 200 leaders to spread the gospel in Iran. The center was founded by Rev. Mehrdad Fatehi, and the courses taught in there include Hermeneutics, Ministry and Teaching of Jesus, Apologetics, Christian Counseling, The Triune God, and The Suffering Church.  The entire course should take up to three years to complete, subject to the study time available to each student.
"While Iran's fast church growth is a cause for celebration, there is serious concern for the lack of depth in the movement and the severe shortage of well-equipped leaders to address this need. The church is facing a leadership crisis that, if not addressed, will damage its health and mission. So there is a great and urgent need for training quality leaders, and to do that there needs to be quality theological and leadership training that is accessible to those who are serving inside the country," the same CP source said.

The source further stated: "This is not a political movement at all, but it will have political implications because it is touching the core foundations of society. This is battling prostitution and drug addiction. If you want to live in a country that doesn't fund terrorists, you have to develop the values of the grassroots...It is not anti-Iranian...It's an Iranian movement. It's a great, great number of Muslims turning to Christ."
About 70 percent of Pars' students live in Iran and are trained within the country. Candidates who study with Pars are mostly accepted by the recommendation of their leaders and are put under the care of a mentor who guides them in their spiritual journey and practical ministry.
"These are all underground, and the students need to keep extreme security measures," the source said. "They have times of worship and prayer, but these need to be done very quietly and without attracting attention."
A major part of the learning is done from within the students' homes on offline computers, using Pars' video lectures, workbooks, and resources in a digital format. The students stay in touch with their teachers and tutors through email. This allows them to submit their assignments and receive feedback on a regular basis.
Additionally, Pars broadcasts courses through two satellite channels into Iran, which are watched by thousands of Iranians  both Christians and others. The students also engage in group discussions and can also attend Pars' formation conferences that are held in other countries where students can actually meet their teachers in person, and pray and have fellowship with them.
Although there are well over 200 emerging Christian leaders in Iran who want to train with Pars, the center needs more human and financial resources from well-wishers to be able to accommodate more students, whose number is hoped to rise to 1,000 or more.  Along with those who are studying from inside Iran, Pars also trains Iranian Christians from over 17 countries.

September 24, 2021The Largest One Year Increase In Murder In The History Of The United States

September 24, 2021Get Ready For A Tough Winter - Shortages Are Getting Worse Not Better

Have you noticed that store shelves are starting to get emptier and emptier? You're not alone and it's expected to get much worse as we h...

Amazon's electronic palm reader, known as Amazon One, launched at the Red Rocks Amphitheatre in Denver last week to much fanfare promising...

Try as some might, including the Israeli government, it's not possible to pretend that a party being pushed around by anti-Zionists and an...

September 22, 2021China's Rapid Nuclear Build-Up Can No Longer Be Ignored

The Taliban is executing Christians faster than her organization can find them. "We started out with 300 three weeks ago, and we're down t...

September 22, 2021The Woke Left Want To Force Our Daughters Into Combat

According to Biden's party, forcing women into combat is the only path to "pure equality." Of course, the idea of parity probably sounds g...