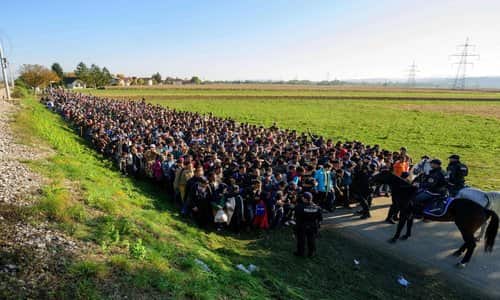 By Ryan Mauro/Clarion Project February 20, 2018
Share this article:
Senior Iranian and Turkish officials have explicitly threatened to overwhelm Europe with new waves of Middle Eastern refugees if their demands aren't met. To these Islamist republics, Muslim refugees are weapons of jihad, not victims.
Iranian officials are also implying that they will build nuclear weapons or at least approach nuclear "break-out" capability as quickly as possible if the nuclear deal ends.
As reported by Abdullah Bozkurt, president of the Stockholm Center for Freedom and author of Turkey Interrupted, the Turkish Interior Minister has threatened to escalate the refugee crisis to the point where German Chancellor Angela Merkel is forced out of power.

In other words, the Islamist government of Turkey -- a NATO "ally" -- is claiming it holds the fate of Germany's elected politicians in its hands.
The senior Turkish officials did not outline exactly how Turkey would make refugees flow into Europe, but presumably they would stop hosting Syrian refugees and facilitate a massive movement into the West by overwhelming Greece and Bulgaria, while others would make the long trek back to North Africa for a dangerous northwards trip across the sea.
It is also possible that the Turkish government could try to kill two birds with one stone by provoking a Kurdish refugee crisis that destabilizes Europe while at the same time shifts Turkey's demographics in a direction more favorable to the Islamists.
About 18 to 20 percent of the Turkish population is Kurdish and its proportion is growing due to higher birth rates. That means that Erdogan's Islamist constituency is growing weaker day by day, even without taking into account the growing angst of non-Islamist, non-Kurdish Turks.
A third bird can be killed with this single stone if the crisis negatively impacts relations between the West and the Kurds, such as by fomenting anti-Muslim sentiment against the mostly pro-Western Kurds.
Senior Iranian officials are likewise threatening to escalate the refugee crisis in Europe if the U.S. leaves the nuclear deal. Officials have also warned that in this case, Iran will "follow North Korea," the closest the regime has come to openly saying they will build nuclear weapons.

On January 29, Iranian Deputy Foreign Minister for Political Affairs Abbas Araghchi said in a television interview that West Asia determines the security of Europe and Iran will use that power if the nuclear deal ends.
He said the price the West would have to pay if the nuclear deal ends is "crystal clear": "Just a wave of refugees could throw them into a state of disarray."
Notice the word "just" in the translation. The Iranian official isn't just mentioning a form of retaliation. He is expressing his belief that the West, especially Europe, is fragile and at risk of crumbling with a simple shove. He sees Europe as essentially a "paper tiger," as Mao Ze-Dong used to say of the U.S.
He did not exactly state how the end of the nuclear deal would result in a new refugee crisis, yet it is in the regime's morbid interests to use sectarian violence to shift the demographics of Syria, Iraq, Lebanon, Afghanistan, Yemen and even Bahrain and Saudi Arabia's Eastern Province.
If the Iranian regime ends up facing a popular revolution, it could even use an internal refugee crisis as beneficial if it results in an exodus of pro-Western Persians and anti-regime minorities like Arabs, Kurds, Azeris and Baluchis.
Araghchi also hinted that Iran will build a nuclear bomb, though he left just enough ambiguity in his statements to deny what he was obviously implying. He began the interview by expressing that he must be careful in his answers because they will be interpreted as official policy.

"I'd like to say that we made no key vital concessions and all of them are reversible. Had Mr. Trump or anybody else known they wouldn't pay any price for abandoning the deal, they would have done it already...
"Look! Their achievement was not to prevent us from acquiring the Iranian nuclear bomb 'in their point of view,' but was to procrastinate [delay] that only for one year as they'd call 'break-out time.'"
What he means is that the West's goal was to stop Iran from achieving "nuclear break-out capability," the point at which all the assets are available for an imminent development of a nuclear bomb. He correctly states that the Obama Administration and its European partners wanted the deal to keep Iran at least one year away from "breakout" capability, so that there is potentially enough time for the West to detect and responded to an Iranian dash towards nukes.
Here, Araghchi is saying that the end of the Joint Comprehensive Plan of Action (the formal title of the deal) will result in two things:
- A flow of refugees to Europe
- Iran being able to quickly attain nuclear break-out capability so they can build an arsenal whenever they wish with little or no time to be stopped
Araghchi has been in Iran's foreign ministry in some capacity since 1989, so his words should be taken very seriously. He is no "rogue" official who went "off-message," as the regime propagandists may try to frame it.
Of course, Iran always intended to obtain a nuclear arsenal. As far back as 2010, I theorized that Iran's "script to get the bomb" included finding a pretext with which to justify the construction of a nuclear arsenal (i.e., an Israeli airstrike on its nuclear sites).
It's very possible that the regime always intended for the nuclear deal to be cancelled, preferably in a way that enables it to blame the U.S. for "forcing" it to leave the Nuclear Non-Proliferation Treaty and build nukes.
The Islamist enemies of the West have seen how refugee flows stress our societies, impact our politics and, in some cases, strengthen bigoted impulses that exist in any country.
They also know that refugees can help them build an ideological base in Western countries, seeing them not as victims fleeing theocratic extremism but as subversive colonizers pioneering the expansion of Islamism.
For Islamists like those in the Turkish and Iranian governments, this shift in population is like establishing an unregistered lobby that will open up political opportunities in the future.
Originally published at Clarion Project - reposted with permission.