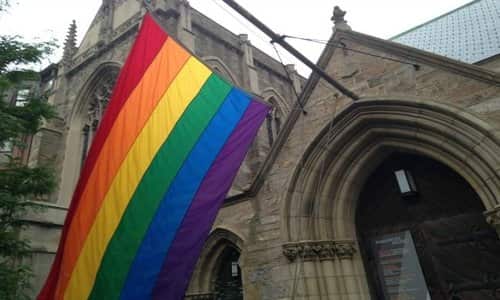 By PNW Staff February 09, 2018
Share this article:
The latest clash between feminism and the Church centers around the grammatical gender of God Himself with the Episcopal Diocese of Washington D.C. voting to ban the use of masculine pronouns when referring to God. And this wouldn't be the first church to do so. The Church of Sweden made a similar change in 2017 when it voted to use only gender-neutral pronouns in reference to God.
The resolution in the Episcopal Diocese recently passed together with another pair of changes, a move to include "transgendered people" in all aspects of congregational life and to become officially a sanctuary diocese for immigrants (no discussion was held before their passage).
Needless to say, this official re-definition of God from a single Episcopal Diocese has started a fair amount of controversy.

The text of the new dictate was quickly amended to clarify, "if revision of the Book of Common Prayer is authorized, to utilize expansive language for God from the rich sources of feminine, masculine, and non-binary imagery for God found in the Scripture and tradition and, when possible, to avoid the use of gendered pronouns for God."
The Book of Common Prayer is the prayer book used by Anglicans across the globe and a modification of this text thus strikes at the heart of Anglican practice.
In support of the decision, church leaders explained, "Over the centuries, our language and our understanding of God has continued to change and adapt."
They argue that the sole use of masculine pronouns "limits our understanding of God" and that "by expanding our language for God, we will expand our image of God and the nature of God."
One delegate came equipped with a copy of The Inclusive Bible, a translation of the Bible from 2004 by a group of Priests for Equality that attempts to remove all traces of sexism and gender-bias from the Holy Book.

Linda Calkins, a 'Reverend' from Bartholomew's Episcopal Church in Laytonsville, Maryland addressed the delegates by saying, "I am still waiting for the Episcopal Church to come to the place where all people feel they can speak God's name.
Many, many women I have spoken with over the past almost 20 years in ordained ministry have felt that they could not be a part of any church because of the male image of God that is systemic and that is sustained throughout our liturgies."
As an example to illustrate her point, Calkins provides a verse from Genesis Chapter 17 in which God tells Abraham "I am El Shaddai." According to this new reading of the Old Testament, the non-masculine translation of El Shaddai would be "God with breasts".
In response to such nonsense Biblical scholar Michael Brown had the following to say:
"There’s not a stitch of scholarly evidence to support this, and I can state that with authority. Not only is my Ph.D. in Near Eastern Languages and Literatures from New York University, but I specialized in comparative Semitic lexicography (meaning, understanding dictionary definitions of words in light of the comparative ancient languages). My doctoral dissertation focused on one Hebrew word (in light of its ancient Near Eastern background), and I own every major Hebrew lexicon and theological encyclopedia. Every single one of them rejects the idea that El Shaddai means “God of (many) breasts.”
But what should the average Christian take away from this controversy? Is this another example of feminism and transgenderism run amok, or does it reflect a deeper truth about the nature of the divine that surpasses the notions of gender as understood by humanity?
Christians have for centuries prayed to God the Father and Jesus Christ; clearly, both male and masculine. Dr. Paul Tarazi of St. Vladimir Orthodox Theological Seminary comments that "Jesus did not call God "Imma" (Mother) but in every case "Abba" (Father).

Jesus taught his followers as well to refer to God as Father. St. Gregory the Theologian believed that the name "Father" is proper to God and not simply an adaptation of human concepts of authority and protection. St. Athanasius the Great also declared that each of the specific names (Father, Son and Holy Spirit) are proper names and are part of God's essence and St. Gregory instructed Christians that any deviation from these terms represents a deviation from the true faith.
Any other names, he writes, "serve as a point of deflection of sound doctrine."
Traditionalists worry that amid cries of "down with the patriarchy!" and "me too!", the nuances of the faith and the divine nature of God may be lost. Is this attempt to ban masculine language for God an honest effort to represent God accurately or simply a radical language fad that has swept through society.
Perhaps instead of inserting an ungrammatical "they", interspersing feminine pronouns throughout the Bible and resorting to terms like "God with breasts", the Episcopal Church of Washington D.C. should pause to reflect on the true nature of God rather than attempt to pull Him into a feminist debate that attempts to erase any use of masculine language.
Rather than ban masculine language or insert absurdly-gendered imagery within foundational religious texts, perhaps Christians should seek to understand how both masculinity and femininity originate with God the Father as both creator and authority over the universe and all mankind.