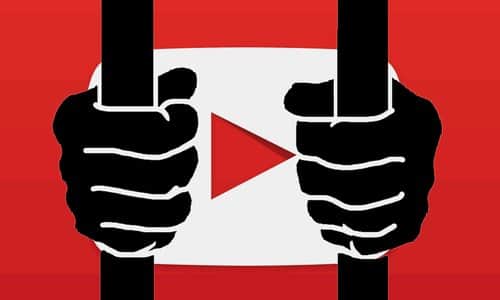 By Matt Agorist/Activist Post August 15, 2017
Share this article:
**Note From Prophecy News Watch** - We are one of the sites affected by this crackdown as our youtube videos have now been demonetized.
In the last week, we've witnessed a massive crackdown on alternative media -- the likes of which are unprecedented.
Quite literally overnight, YouTube issued a sweeping update and demonetized thousands of video in accounts across the political spectrum.
If you ask Paul Joseph Watson from Infowars.com, it's because they are cracking down on pro-Trump pages. Pro-Trump personalities Diamond and Silk were also hit with the demonetization purge and they also claim it's because YouTube is going after Trump supporters.
While both Watson and Diamond and Silk had their videos demonetized, the rabbit hole goes far deeper than just pro-Trump sites.
If it were just pro-Trump videos being hit with the censorship sweep, then why is Luke Rudkowski, founder of We Are Change, also being purged?

The Free Thought Project spoke to Rudkowski Friday and asked if any of his many videos that were clearly critical of Trump were demonetized. He tells us that all of them were.
Rudkowski is most certainly not a participant of the left/right paradigm, nor is he a Trump supporter, but he was hit as well.
We asked Rudkowski what he thought about people claiming that it's their pro-Trump status getting them censored, here's what he said:
Obviously that is not the case since it looks like they hit me first and my channel is clearly very critical of Donald Trump for the real reasons that the MSM would never touch.
It's not just We Are Change and pro-Trump folks either. The folks over at World Socialist Web Site -- a far left organization with a clearly advertised agenda -- is also being hit.
According to a scathing report from wsws.org, they aren't alone either. Google, YouTube's owner, has reportedly undertaken a similar attack on alternative viewpoints. As wsws reports,
Truthout, a not-for-profit news website that focuses on political, social, and ecological developments from a left progressive standpoint, had its readership plunge by 35 percent since April.
The Real News , a nonprofit video news and documentary service, has had its search traffic fall by 37 percent. Another site, Common Dreams , last week told the WSWS that its search traffic had fallen by up to 50 percent.

"This is political censorship of the worst sort; it's just an excuse to suppress political viewpoints," Robert Epstein, a former editor in chief of Psychology Today and noted expert on Google, told wsws.
Those who've been paying attention predicted this crackdown and watched it come to a head at the beginning of this month when the Anti-Defamation League applauded Google and YouTube for taking on hate speech and extremist content while having the ADL be the ones who decide what gets flagged.
"The fight against terrorist use of online resources and cyberhate has become one of the most daunting challenges in modern history," said Jonathan A. Greenblatt, ADL CEO. "Google has been a leader in this area from the beginning.
The reality is extremists and terrorists continue to migrate to and exploit various other social media platforms. We hope that those platforms can learn from and emulate what YouTube is doing to proactively identify and remove extremist content."
For those that don't know, last year, the ADL labeled the cartoon, Pepe the frog, a symbol of hate. This irrational behavior is hardly indicative of a third party who ostensibly possesses the skills to determine what people should and shouldn't see online.
Given these recent moves, we can infer that what is likely happening is far more insidious than pro-Trump censorship or pro-left censorship.

While the ADL is likely using their newfound authority to silence those with whom they disagree politically -- by labeling them extremists -- this new censorship appears to go after anyone who challenges the establishment.
Disagreeing with the status quo is the new hate speech.
Those who challenge the corporate government paradigm are being lumped in with extremist groups and being flagged as hate speech.
Sadly, only those who get their information from these alternative sources who are unafraid of challenging the oligarchy will even know this is happening.
It takes years of hard work to build a platform that is able to break through the static shoved out by the mainstream media and reach people still plugged into the matrix.
However, once they see the establishment for what it is, this cannot be unseen. The powers that be know this and appear to be moving in to stop it.
Imagine if you never came across alternative media that challenged your thought process and made you question the government. Imagine where you'd be right now without that information.
Now, imagine that information is snubbed out forever. Is that a world you want to live in?
We didn't think so.
While we may disagree on different issues, if any one group is allowed to be silenced, it is only a matter of time until everyone else is silenced too.
What makes freedom work is the ability for contrasting ideas to be presented -- even if you find them repugnant.
When we stop the dissemination of ideas, only one idea prevails and it is certainly not freedom.
Originally published at Free Thought Project - reposted with permission.