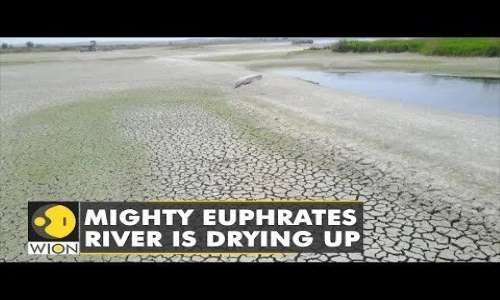 By Adam Eliyahu Berkowitz/Israel 365 News November 22, 2022
Share this article:
The region once known as the Fertile Crescent is on the verge of a food crisis as the main sources of water disappear. Officials struggle to cope as a prophetic scenario appears to materialize.
Iraqi officials are reporting that for three consecutive years, the rainy season has begun later and ended sooner than the historic norm. This has been coupled with less water flowing through its two main rivers, the Tigris and the Euphrates. The region has also been plagued by ongoing conflict.
"Desertification now threatens almost 40% of the area of our country - a country that was once one of the most fertile and productive in the region," Iraq's President Abdul Latif Rashid told the climate summit in Egypt last week.

Nadhir Al-Ansari, professor at Sweden's Lulea University of Technology, told Reuters that rainfall in Iraq had declined by 30% over the past three decades, with the lowest precipitation coming in the last two years.
"What was once known as the Fertile Crescent started to die about 35 years ago," he said.
Officials accuse Turkey of cutting the river's flow upstream over the last two years to half the level it committed to in a 1987 accord, a claim the Turkish government denies.
In the year to September, rainfall in southeast Turkey where the rivers originate was 29% below the average of the previous three decades, according to Turkey's meteorological agency. Dams and drought have reduced the waters of the two rivers to about 20% of previous levels.
All these elements combined have led to a food crisis in the region. Almost 90% of rain-fed crops, mostly wheat and barley, failed this season, according to the United Nations Food and Agriculture Organization (FAO) in Iraq.

The 1,700-mile-long Euphrates is the main source of drinking water as well as powering three hydroelectric plants that produce electricity for about three million people in Syria. Two dams in northern Syria face imminent closure which would leave about three million people without any access to electricity.
The water level at the Tishrin Dam, the first into which the river falls inside Syria, has dropped five meters and is currently about ten centimeters above "dead level" when the turbines stop producing electricity.
The Euphrates figures prominently in the Bible with it being described as bordering the Garden of Eden.
"The name of the third river is Tigris, the one that flows east of Assyria. And the fourth river is the Euphrates. "Genesis 2:14
It was also named as one of the borders of the land God granted to Abraham's descendants.

"On that day Hashem made a covenant with Avram, saying, "To your offspring I assign this land, from the river of Egypt to the great river, the river Euphrates:" Genesis 15:18
The prophet Jeremiah described how the waters of Babylon, the region currently including Syria and Iraq, would dry up as a punishment for their idolatrous practices, the devastation being so complete as to render the region, once part of the so-called 'fertile crescent', uninhabitable.
Christian eschatology foresees the River Euphrates drying up in the Book of Revelation Chapter 16 and playing an important role in the march of the Kings of the East upon the Middle East.
Originally published at Israel 365 - reposted with permission