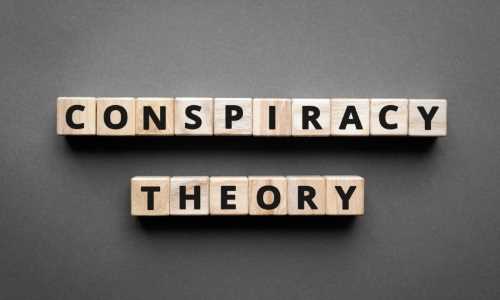 By Jonathan Brentner/jonathanbrentner.com November 16, 2022
Share this article:
Evil people have always conspired against the righteous. We see this in the words of David in Psalm 37:12, written three thousand years ago:
"The wicked plots against the righteous and gnashes his teeth at him"
Why, then, do the majority of people doubt that this happens today? Why do so many believers deny that there's a deadly intent in the agenda of the globalists?
One possible answer to the above questions is that many regard the warnings they hear as "conspiracy theories." This has become a popular yet convenient way for people to disregard the threats to their wellbeing and continue with life as though they don't really exist.
However, what if the items that most people regard as conspiracy theories are actually spoiler alerts for what lies ahead? What if they are like a lighthouse illuminating the clear and present dangers of our day?

Long, long ago, IBM aired commercials under the banner of "You Make the Call." Viewers watched short video clips of plays from NFL football games after which an announcer asked what call they would make if they were the referee. Was it a penalty? Was it a fumble? Did the receiver catch the ball inbounds? Was it a touchdown?
As you go through the list below, I invite you to also "make the call." Do these things result from the perspective of a conspiracy nut given to baseless doomsday scenarios?
Or are they valid portrayals of events that signal the nearness of the seven-year Tribulation?
1. CATASTROPHIC WORLDWIDE FOOD SHORTAGES DURING 2023
I often read warnings of catastrophic food shortages for 2023. Back in June of this year I wrote, Is America on the Cusp of a Food Catastrophe? In it, I provided much supporting evidence for this from a wide variety of sources.
Since I wrote that article, both the World Health Organization and the UN have come out with warnings of their own concerning dire food shortages for 2023.
This coming time of worldwide famine aligns closely with Bible prophecy for the time of the Tribulation (Matthew 24:7; Revelation 6:6). These forecasts of drastic shortages of food are what the Bible says we should expect in the last days leading up to the Day of the Lord.
Do you agree that there's much evidence supporting this?
2. DIESEL FUEL SHORTAGES
There's considerable talk about impending diesel fuel shortages in the U.S. Is this also just a conspiracy theory? I don't think so.
A recent Reuters' news story out of London, Column: U.S. Diesel shortage increasingly likely until economy slows, says that yes, diesel fuel shortages pose a real threat to the American economy. The story states that the only remedy for this crisis is a dramatic slowing of the economy, such as a deep recession or depression, so that the demand for the fuel lessens.
A November 5, 2022, Newsweek article also warned of the critical diesel fuel shortage in America. The title itself, Diesel Shortage Will Hit These Seven States the Hardest, reveals that these warnings are not just the doomsday scenarios of those with tinfoil hats, but rather point to a legitimate and looming crisis.
If these shortages continue or get worse, they will drive up the prices of everything in the short term and lead to panic buying.
I have read scenarios of the chaos and violence that would erupt in the U.S. if we completely run out of diesel fuel and they sound remarkably similar to what John describes in Revelation 6:5-8.
Even if we don't run completely out of diesel fuel, isn't it likely that the shortages will cause much suffering as prices skyrocket for basic necessities?

3. RECORD INFLATION THAT WILL GET MUCH WORSE
Inflation in the U.S. and in many European countries is already at levels not seen for almost five decades and many predict this will become far worse in the months ahead. The scarcity of natural gas in Europe will not only kill a great many people, but also accelerate rising prices for everyday necessities.
The quote below comes from a recent Market Watch article, Hedge-fund giant Elliott warns looming hyperinflation could lead to 'global societal collapse. As the title suggests, it assumes that "hyperinflation" lies in our future.
". . . executives at leading hedge-fund firm Elliott Management Corp. warn that the world is heading toward the worst financial crisis since World War II."
Is this not exactly what Revelation 6:5-6 says about skyrocketing inflation early in the Tribulation? We already see numerous indicators of spiraling price increases throughout the world, which is precisely what we would expect to see during the days leading up the time that John describes in Revelation 6-18.
What call do you make on this?
4. THREATS OF WORLD WAR III
The leaders of NATO and Vladimir Putin talk about the use of nuclear weapons as though it's something normal and to be expected. Some world leaders say that World War III has already started; others say it's ever so close.
Another warning of war comes from Chinese President Xi Jinping. He recently stated that China is "preparing for war." Since no nation seems ready to declare war against this nation anytime soon, it begs this question: Who is China preparing to attack and when?
At any moment, the war in Ukraine might explode into a much a larger conflict; we hear numerous threats of this.
North Korea has stepped up both its weapon testing and threats against America.
I cannot predict what will happen between now and the Rapture, but I believe what we see is stage-setting for the deadly wars that will happen after the Lord takes us home to glory.
The Bible tells us that great wars will happen in during the Tribulation. The second rider of the apocalypse is that of war (Revelation 6:3-4, 8) and the wars that he spawns will contribute to the deaths of an exceptionally number of people, a total that fits with the use of nuclear weapons.
Do you see great wars in the near future?