Feast Of Tabernacles: Rapture Types & Shadows Of Things To Come 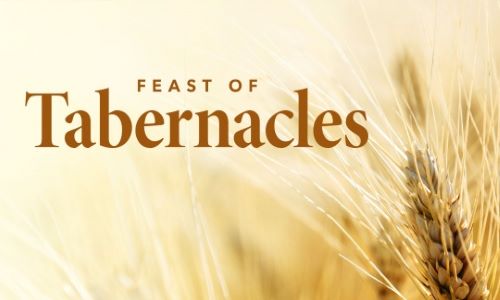 By T.W. Tramm/Season Of Return October 11, 2022
Share this article:
The most joyous festival on God's calendar, the Feast of Tabernacles, begins October 11 This year.
Also called the Feast of Ingathering, Tabernacles celebrates the completion of the harvest, when the year's produce is gathered in from the fields (Ex. 23:16; Deut. 16:3).
To observe the festival, God instructed the Israelites to "take palm branches and rejoice before the Lord for seven days" (Lev. 23:40, 41). Additionally, the people were to build makeshift huts, or booths, and live in them during the feast as a reminder of the temporary shelters they lived in during the time in the wilderness (Lev. 23:42, 43).
While the Feast of Tabernacles points ultimately to the Millennial Kingdom, when God will dwell, or "tabernacle," with man, its themes also correspond to the Rapture.

Consider the overall festival scenario:
Pentecost, in early summer, is when the Church is "sealed," or betrothed, by the Holy Spirit in anticipation of the future day of redemption (Acts 2; Eph. 4:30).
Feast of Trumpets, at summer's end, is a "memorial," or reminder, of the betrothal and a wake-up call that the day of redemption is near (Lev. 23:24).
The ten "Days of Awe" represent the final opportunity to be sealed before Yom Kippur arrives.
Yom Kippur, the day of the Jubilee trumpet blast, is when one's fate is determined: the sounding of the trumpet is a declaration of redemption for those who are sealed by the Holy Spirit, and a pronouncement of judgment for those who are not (Isa. 61:1, 2; 63:3, 4).
Finally, the full moon at Tabernacles denotes the fullness of the Gentiles, and the completion of the Church-harvest. The seven days of rejoicing before the Lord correspond to the seven-year 'wedding celebration' in heaven and, conversely, seven years of Tribulation on earth. This scenario is pictured in Revelation where a great multitude is seen celebrating the Feast of Tabernacles in heaven, during the Tribulation (Rev. 7:9, 10).
Speaking of Tabernacles and the Tribulation, it was seven years ago on the Feast of Tabernacles that a blood moon eclipse, a rare "supersized" version, appeared above the Americas, Europe, Africa, and the Middle East. Since the God of the Bible is known for giving a seven-year warning, this ominous sign in 2015 is one to take note of in 2022:
"The moon will turn blood red before the great and terrible day of the LORD comes" (Joel 2:31).
Having made the case for a Tabernacles Rapture, the point of this study is not that the Rapture must happen at the Feast of Tabernacles.
The point is that it could.

The Rapture could also occur on a day unforeseen:
Jesus ascended to heaven on a non-feast day, and two angels testified that He will return in "like manner" (Acts 1:10, 11).
Paul says there is no need to discuss "times and dates" because the Day of the Lord will arrive like a thief, i.e., at a time no one can predict (1 Thess. 5:1, 2 NIV).
Jesus tells even His closest followers to "keep watch," because He is coming at an hour they do not expect (Matt. 24:44)
For this reason, it is wise to be ready always:
"Be dressed and keep your lamps burning ... Blessed are those servants whom the master finds awake when he comes .... If he comes in the second watch, or in the third, and finds them awake, blessed are those servants!" (Luke 12:35, 37, 38).
. . .
NOTES:
1. Feast of Tabernacles timing: The modern (precalculated) Jewish calendar has the seven-day Feast of Tabernacles beginning at sunset October 9. However, those who reckon the months by the sighting of the New-Moon crescent will observe the festival two days later, beginning at sunset October 11.
https://torahcalendar.com/Calendar.asp?YM=Y2022M7
2. Tabernacles is mentioned more than any other festival in Scripture.
3. The temporary shelters the Israelites lived in during the Feast of Tabernacles are also symbolic of man, a spiritually eternal being who dwells in a temporary covering, or body, in the present world.
4. Trumpets are sounded at all biblical festivals (Ps. 81:3).
5. Feast of Tabernacles observed in heaven: It is evident that the great multitude in Revelation 7 is celebrating Tabernacles because they are rejoicing before the Lord with palm branches, and it is said that God will spread His "tabernacle" over them (vv. 9-12, 15 BSB). The reason given for the multitude being there is that "they have washed their robes ... in the blood of the Lamb," an allusion to the white robe worn by the priest on the Day of Atonement (Lev. 16:3-5).
Originally published at Season Of His Return - reposted with permission.