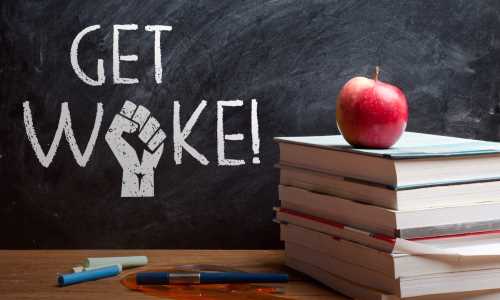 By Caroline Glick/JNS.org October 11, 2021
Share this article:
How does a nation lose its freedom? One way, of course, is through foreign conquest. History is filled with examples of nations being subjugated and enslaved by foreign tyranny. Today, in the United States, Americans are not losing their liberty to a foreign power, but to domestic revolutionaries.
The revolutionaries are willing to use force, as they showed in the summer of 2020 when they burned and looted their way through U.S. cities. But generally speaking, their weapon is not the gun or the jackboot, but demonization and intimidation. And now, with the Biden administration firmly ensconced in power, they move forward with their revolution with the firm backing of the state and its weapons of repression and criminalization.
Last month the revolutionaries and the administration converged before the cameras at a meeting between Vice President Kamala Harris and students at George Mason University in Virginia.
A female student with the voice of a child used her audience with Harris as an opportunity to promote the revolution's vicious hatred of Jews, and of America. She sniffed emotionally under her mask and told America's second highest elected official that her feelings had been hurt when Congress passed a bill for supplemental funding to Israel's Iron Dome anti-missile system. The move, she yowled, "hurts my heart because it's an ethnic genocide and a displacement of people, the same that happened in America, and I'm sure you're aware of this."

Harris might have been expected to call the student out for promoting anti-Semitic and anti-American blood libels. But she didn't. Instead, Harris empowered the young bigot. She said she was "glad" the student had shared her views. "This is about the fact that your voice, your perspective, your experience, your truth, should not be suppressed and it must be heard, right? And one of the things we're fighting for in a democracy, right?"
There are two ways to understand Harris's behavior, and they can both be true at the same time. It's possible that Harris was intimidated. She didn't want to get into a confrontation with a delicate crybully who talked about her hurting heart. Telling off whiny revolutionaries doesn't film well. In fact, more often than not, it leads to one's cancellation in society.
Consider the plight of professor Dorian Abbot. A renowned geophysicist at the University of Chicago, Abbot was invited to present MIT's prestigious Carlson lecture later this month. But when word got out that Abbot was coming to campus, the revolutionaries at MIT demanded that the invitation be rescinded.
It turns out that Abbot is guilty of expressing wrong thoughts. He opposes academic discrimination against white students on the basis of their skin color. Like Harris, MIT administrators decided it would be better to give in to the revolutionary mob than to stand up for their students' right to learn from Abbot.
The wrongthink mobs who reign supreme in most U.S. campuses have spread their tentacles to the political realm. This week, revolutionaries in Arizona hounded moderate Democrat Sen. Kyrsten Sinema in a public bathroom. They chastised and threatened her while she sat in a stall, and as she washed her hands in the sink. Sinema was deemed deserving of hectoring in the ladies' room because she opposes the revolutionaries' $3.5 trillion social engineering budget for 2022.
The second reason Harris may have decided to support the George Mason student's slander of Israel and America is because it is likely that she really liked what the student was saying. This brings us to what the revolution is about and to the Biden-Harris administration's position on its goals.
As Barack Obama said after winning the 2008 presidential election, the purpose of the revolution is to "fundamentally transform the United States of America." The doctrine that stands at the heart of the revolution is critical race theory. As CRT researcher Christopher Rufo of the Manhattan Institute has written, "Critical race theorists believe that American institutions, such as the Constitution and legal system, preach freedom and equality, but are mere 'camouflages' for naked racial domination. They believe that racism is a constant, universal condition."

Rufo continued, "Critical race theory reformulates the old Marxist dichotomy of oppressor and oppressed, replacing the class categories of bourgeoisie and proletariat with the identity categories of White and Black. But the basic conclusion is the same: in order to liberate man, society must be fundamentally transformed through moral, economic, and political revolution."
In early 2020, Rufo exposed that the federal government, including government departments and agencies, as well as the U.S. armed forces, were requiring their employees and servicemen to undergo CRT workshops and seminars. Participants in the seminars were separated by race.
White participants were required to acknowledge and disavow their "whiteness," that is, their inherent racism, and apologize to non-whites and commit themselves to empowering their non-white colleagues at their own expense, since, they were told, as white people, they were inherently oppressors.
Rufo's revelations caused an uproar. Then-President Donald Trump reacted by issuing an executive order banning CRT training from the federal government and the armed forces.
Trump's executive order was one of the first policies Biden overturned. Biden cancelled Trump's executive order on his first day in office. In the days and months that have followed, his administration has reinstated and expanded CRT indoctrination.
Since early this year, the center of gravity in the fight against the CRT revolution moved from the government to the classroom. Rufo and others exposed how under the cover of fighting racism, local school boards from coast to coast have been transforming K-12 classrooms into CRT indoctrination centers. Kindergarten children are taught that their gender is not fixed, but fluid. Tales of hardcore communist, anti-American, anti-white and anti-police indoctrination have abounded across America.
For example, fifth graders in a Philadelphia elementary school were forced to celebrate "Black communism." Kindergarteners in Buffalo, New York were taught that "all white people" are racists and forced to watch a video of dead black children. They were warned of "racist police and state-sanctioned violence" that placed their lives in constant jeopardy.
Parents saw the indoctrination first hand due to the school shutdowns over the past year and a half in response to the COVID-19 pandemic. As the schoolrooms moved into the homes through Zoom, American parents saw their children's teachers demonize police and teach them to hate their country, judge people by their skin color, and reject the values at the heart of the American experience. The backlash has been profound.
Over the spring and summer, thousands of concerned parents countrywide began attending school board meetings and demanding that the indoctrination stop and CRT curricula be withdrawn. Videos of the meetings, and the invariably dismissive and hostile responses parents received from school board members, were seen by tens of millions of people. In Virginia, which has been a focal point of the struggle, parents have been subjected to arrest for trying to protect their children from CRT.

Two weeks ago, the CRT revolutionaries opened their counter-assault on the parents. At a gubernatorial debate in Virginia on Sept. 28, former governor and current Democrat candidate Terry McAuliffe said that parents have no right to interfere with school curricula.
"I'm not going to let parents come into schools and actually take books out and make their own decisions," he said, adding, "I don't think parents should be telling schools what they should teach."
The next day, the National School Boards Association shot off a letter to Biden asking him to direct his administration to treat the protesting parents as "domestic terrorists."
And this week, Attorney General Merrick Garland issued a memo to the FBI Director and federal prosecutors effectively ordering them to fulfill the NSBA's request.
Garland's memo was directed at parents no less than to federal law enforcement officials. And his message was clear: If you object to CRT indoctrination in the classroom, the federal government will treat you like terrorists. You will lose everything. Under the circumstances, how many parents will be willing to continue the fight for their children's American souls?
This returns us to the student at George Mason. The anti-American and anti-Semitic lies she propounded to Harris were not her lies. They were the lies she has been taught by the CRT revolutionaries in the classroom. They taught her that the United States was born not in liberty, but in slavery, racism and genocide.
She has been taught that the Declaration of Independence, the Constitution, the Civil War and the Civil Rights Act were all fig leaves behind which the true venality of America operates and carries out its oppressive, genocidal and racist machinations. There is no forgiveness for America's crimes. Only the revolution, which will "fundamentally transform the United States," can fix what is ailing Uncle Sam.
Likewise, the Jewish state, America's mini-me, can only be redeemed when the "colonialist Jewish settlers" and their "genocidal," "apartheid" regime are kicked out of "Palestine."
Consistent polling data show that between two thirds and three quarters of Americans oppose the inclusion of CRT in school curricula. But the revolutionaries don't care. They don't need the public's approval with the FBI, U.S. attorneys, the president and the vice president on their side and placing the full force of the federal government behind their efforts.
Americans are not losing their liberty to invading armies from China or Russia, or even to terrorists from Al-Qaeda. Those enemies are all sitting on the side, eating popcorn and watching as the combined force of CRT revolutionaries and the federal government trample the rights and freedoms that have defined America since its founding, in favor of "their voice, their perspective, their experience and their truth."
Originally published at JNS.org - reposted with permission.