Will A New Iran Nuclear Deal Be Biden’s Next Folly? 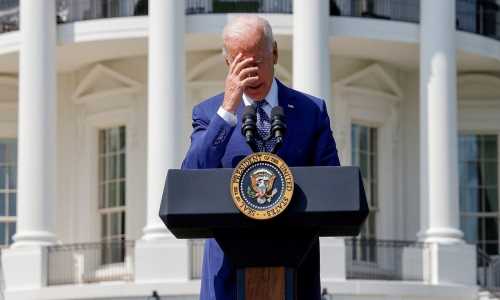 By James Sinkinson/JNS.org September 02, 2021
Share this article:
While the media are decrying and dissecting President Biden's catastrophe in Afghanistan, his Middle East staff are frantically trying to lure the Islamic Republic into the administration's next adventure--a new Iran deal.
Now, even more so because of its Afghanistan blunder, Team Biden feels extreme pressure to pull out a foreign policy success. President Obama was operating under similar pressure to perform when he rammed through the ill-begotten Joint Comprehensive Plan of Action (JCPOA), otherwise known as the Iran nuclear deal, in 2015.
Meanwhile, on Aug. 17, while all eyes were on Kabul, the International Atomic Energy Agency (IAEA), the U.N. atomic watchdog, released a report that detailed how Iran has accelerated its enrichment of uranium to near weapons-grade, posing the greatest threat to global security in a generation.

This dangerous development is merely the latest of Iran breaching the restrictions imposed by the JCPOA, which capped at 3.7 percent the purity to which Tehran can refine uranium. Iran has now enriched uranium to 60 percent, leaving it just 30 percent shy of weapons-grade material.
Unfortunately and bafflingly, despite this massive breach of Iran's commitments as a member of the 1995 Treaty on the Non-Proliferation of Nuclear Weapons (NPT)--as well as numerous violations of the JCPOA starting from day one--the U.S. administration still appears to believe that Iran can be a reasonable partner in honest negotiations.
In 2018, the Trump administration pulled out of the JCPOA, citing Iran's multiple breaches of the agreement, its consistent lies to the international community and its violent aggression in the region--mainly through its terrorist proxies in Syria, Yemen and Lebanon. However, since April 2021, the deal's remaining signatories--France, Germany, the United Kingdom, Russia, China, the European Union and Iran, plus a U.S. delegation--have been holding fruitless negotiations in Vienna in the face of Iranian obstinacy.
Nonetheless, despite exposure of Iran's illicit nuclear program, the United States is still trying to seduce Iran to the negotiating table.
"We have made clear that continued nuclear escalations beyond JCPOA limits are unconstructive and inconsistent with a return to mutual compliance," U.S. State Department spokesperson Ned Price said recently.
Price added that "Iran has no credible need to produce uranium metal, which has direct relevance to nuclear weapons development."

In other words, the United States is clear that Iran is close to nuclear weapons, yet still believes diplomacy can work, despite mountains of evidence to the contrary.
Even as Western nations whisper sweet promises to Iran, the Islamic Republic has not reciprocated, nor has it been idle. Almost every month this year, Iran has demonstrated it is playing games with the West and has only hardened its positions.
The most obvious sign of that hardening is Iran's new president, Ebrahim Raisi, a hardline cleric close to the Supreme Leader Ayatollah Ali Khamenei. Known as the "Butcher of Tehran," Raisi was one of four judges who sat on secret tribunals set up in 1988 that came to be known as the "Death Committee," that sent thousands of political prisoners to their deaths.
Raisi has since purged the government of any so-called "moderates" who were involved in outreach to the West and the JCPOA, replacing them with far more extreme elements, like Ahmad Vahidi, who is wanted by Interpol over his role in 1994 AMIA Jewish center bombing in Buenos Aires, which killed 85 people.
Furthermore, in recent months, Iranian forces have been attacking tankers in international shipping lanes in the Indian Ocean and the Gulf of Oman. This came to a head with a deadly attack against the Mercer Street--a commercial ship that was peacefully transiting through the north Arabian Sea in international waters--killing a British and a Romanian citizen.
The United States, the United Kingdom and NATO joined Israel in accusing Iran over these attacks.
"The U.K. condemns the unlawful and callous attack committed on a merchant vessel," said British Foreign Secretary Dominic Raab, adding, "We believe this attack was deliberate, targeted, and a clear violation of international law by Iran."

Finally, Iran has increased its support and backing for various terrorist organizations., including Hezbollah and Hamas. In January 2021, Islamic Revolutionary Guard Corps commander Amir Ali Hajizadeh stated, "All the missiles you might see in Gaza and Lebanon were created with Iran's support." Since that time, Hamas launched nearly 5,000 rockets at Israel, killing 13 Israelis and wounding over 100.
In recent weeks, Hezbollah has also been using its Iranian-funded arsenal to pound communities in Israel's north. All of this while Lebanon is facing a humanitarian catastrophe, suffering fuel, water and medicine shortages, which are largely blamed on the Shi'ite terror organization.
While these are a few of the recent lowlights of Iran's bad behavior, they are by no means the only examples. Clearly Iran feels emboldened by Biden's enthusiasm for a return to the JCPOA and realizes that regardless of their behavior, channels with the U.S. will remain open and potential U.S. concessions will remain on the table.
After all, the Biden administration is a highly motivated suitor. While it can't afford another foreign policy debacle, it desperately needs a win. But Biden should also realize that the challenges--and risks--when dealing with Iran are massive.
First, there's no more dangerous or duplicitous actor in the Middle East than Iran. Second, there's no indication Iran even wants a deal, and their demands are always outrageous. Finally, even if Iran were to sign another deal, the president can be sure the ayatollahs will promptly cheat on it. That will not go down well in the mid-term elections in 2022, let alone the presidential election in 2024.
Islamic radicals are naturally encouraged by America's retreat in Afghanistan and the effortless takeover by the Taliban--which has declared the Islamic Emirate of Afghanistan. Experts are worried that Afghanistan will once again be a base for terrorist regimes like Al-Qaeda and Islamic State.
Rather than cozying up to Iran, the U.S. administration could counterbalance its growing reputation appeasers by taking a harder line against Iran's true global threat. They should foremost end all contacts with Iran until it significantly reduces its uranium enrichment, definitively ends its nuclear weapons program and stops its destabilizing presence in the region and beyond.
That would be a foreign policy win worth celebrating.
Originally published at JNS.org - reposted with permission.